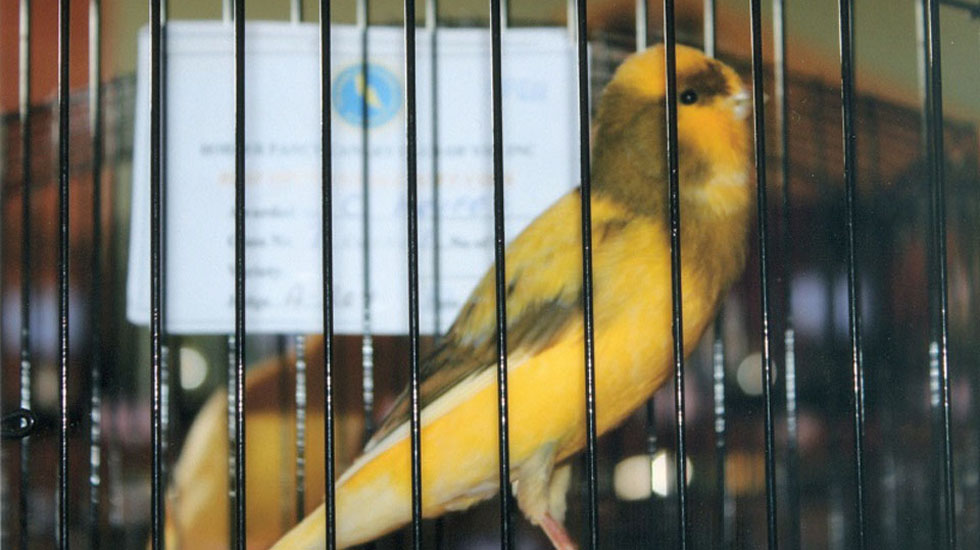 BORDER FANCY STANDARD OF EXCELLENCE – COMMENTARY
The grand essentials of a Border Fancy Canary are Type and Quality; without these it is useless.

The main difference between breeds of canaries is the outline, or type. It is type that makes the breed, then colour makes the variety (clear, self, etc.), so it is only natural that type is the first requirement (and carries 50 points). If a canary is not of Border type, then, irrespective of size, colour, etc., it is just not a Border.

“Quality” is that something we might call, “IT”; that all over finish which cannot fail to attract attention. An otherwise almost perfect bird that lacks quality appears unfinished and second rate. Without both Type and Quality, the Border is useless.

The general appearance is that of a clean cut, lightly made, compact, proportionate, close feathered canary. It will show no tendency to heaviness, roughness or dullness, giving the impression of fine quality and symmetry throughout.

CLEAN CUT. Free from frills, hollows or roughness to spoil the smooth outline.

LIGHTLY MADE. This is not a bird on the skinny side. And it is not a diminutive canary. The term is “lightly”, not “very lightly”. Our bird is just right, neither plump nor thin, regardless of the length. In comparison to other canary breeds such as the Norwich, it is “lightly made”. It is an active bird, hopping jauntily from perch to perch.

COMPACT. All in one piece. It does not mean short and thick.

CLOSE FEATHERED. Every feather should be present but not visible individually. The impression should be as though the bird is moulded in one piece.

SHOWING NO TENDENCY TO HEAVINESS, ROUGHNESS, OR DULLNESS. Obviously our birds display the exact opposite of these features.

GIVING THE IMPRESSION OF FINE QUALITY AND SYMETRY THROUGHOUT. Our bird is beautifully finished and perfectly balanced in every direction.

The points table is given as a relative guide for comparing the value of the various features. The points allocated are the maximum that particular feature can gain when present in its perfect form. However, when present as a fault, it can lose more than the allocated points. For example, if a bird had a small, snaky head and a badly splayed tail, who could say it should beat good all round birds of lesser points. In its entirety, the points table can only be used on birds lacking a major fault.

BODY – BACK WELL FILLED AND NICELY ROUNDED, RUNNING IN ALMOST A STRAIGHT LINE FROM THE GENTLE RISE OVER THE SHOULDERS TO THE ROOT OF THE TAIL. CHEST ALSO NICELY ROUNDED, BUT NEITHER HEAVY NOR PROMINENT, THE LINE GRADUALLY TAPERING TO THE VENT. 20 Points.

Back well filled, not hollow or flat. There is roundness across the back and, to some minor extent, along the back with a gentle rise over the shoulders. It is not a camel hump, but just enough to show that there are shoulders. There is almost a straight line then to the tail, slightly curved, and the tail in line with the body.
CHEST. ALSO NICELY ROUNDED, BUT NEITHER HEAVY NOR PROMINENT, THE LINE GRADUALLY TAPERING TO THE VENT. As in other features, the emphasis is on the roundness; but we are warned against heaviness which is usually in the lower chest or stomach, and prominence which is usually higher in the chest. Prominence and heaviness introduce bulkiness, which is to be avoided at all costs.

Cross sectionally, the body is also round; the thickest part being near the shoulders, approximately one third of the way down the bird. The line gradually tapes away to the vent. This is one continuous sweep from the beak to the tail. A number of birds fail from the legs back, lacking the draw so essential to a good Border, which also gives the bird “Balance”.

HEAD – ROUND, IN PROPORTION AND NEAT LOOKING WITH FULLNESS OF CHEEK, BEAK FINE, EYES CENTRAL TO ROUNDENESS OF HEAD 10 Points.

The head is round and full in all directions, free from brows or horns. The previous Standard of Excellence stated that the head should be small. This conveyed the wrong impression. In fact, the head should be in proportion to the rest of the bird. With a bird at 152mm in length, the new Pictorial shows a bird with roundness in the head and in proportion with all the bird’s other features. And it is round from all angles, including the front. The Head resembles a large marble, but not a golf ball. It rises sharply off the beak and goes over in a perfect half circle with the eye forward of centre. The fullness of the cheeks lends itself to the overall roundness of the head. A fine beak is a very desirable feature of the bird. The neck of the bird must be in proportion to the head and body; just right to allow the fine free poise of the head, so much a desired feature of true Border carriage.

WINGS – COMPACT, JUST MEETING AT THE TIPS, COVERING THE RUMP AND BACK WITH DOWNWARD PRESSURE GIVING AN “ALL IN ONE PIECE” APPEARANCE. 10 Points

Good wings look as if they are part of the body. I have mentioned before that the Border looks like it is moulded. Correct wing carriage is essential to this appearance. Wings should not look as if they are sitting on the body and they should never be lifted up from the body as there is no downwards pressure. This is a bad fault.

LEGS – TO BE IN PROPORTION, SHOWING LITTLE THIGH, FINE AND IN HARMONY. 5 Points

Any shortness in the legs and the Border will appear to be low on the perch. And long legs make the bird appear on stilts. The thighs should be just visible enough. The appearance should enhance the symmetry of the bird. The legs have to be strong enough to hold the bird at 60 degrees.

Accurately described as a pipe tail. The tail adds balance and symmetry to the bird. It is narrow and not splayed out. The tail has to be in line with the body. A hinged (dropped) tail or a robin (raised) tail ruins the symmetry and line of the bird completely.

POSITION – SEMI-ERECT AT 60 DEGREES WITH PROUD FREE CARRIAGE OF THE HEAD. 25 Points

The importance of position cannot be over emphasised. This one feature attracts 25% of all points. True Border type is heavily dependant on correct position. If the bird loses the 60 degrees in either direction, the shape of the bird changes dramatically. If the bird is close to the correct angle, the tail is well below the perches and the bird appears jaunty and free moving between the perches. One has to guard against the head not being in proper alignment with the body. In some birds, the head is pushed slightly back and the line is lost.

It is not easy to produce close, firm and fine quality feather. It is a feature that is bred into the birds, just as in any other type feature and is also heavily dependent on proper pairing. When the feather is close, firm and fine, the border has this moulded appearance so important to the Border shape. It is a joy to behold and often separates a Champion from the runners up. Coarse feather, frills, cuts, brows, poorly lying feather, etc. are to be avoided at all costs. When the feathers are all lying as they should, it is difficult to pick out individual feathers and the chest, down to the legs and through to the tail take on a “painted” appearance.

GROUND COLOUR – RICH, SOFT AND PURE,AS LEVEL IN TINT AS POSSIBLE THROUGHOUT, BUT EXTREME DEPTH AND HARDNESS SUCH AS COLOUR FEEDING GIVES ARE DEBARRED. 10- Points

Good colour is not patchy. It is level in tint and rich in colour and even all over. It never displays any features of a bird that is colour fed. Buffs should possess the true mealy appearance so typical of the colour. A buff should not look like a washed out yellow. Yellow hens can sometimes carry a very small degree of frosting and are generally lighter in colour to the cocks.

Size was by far the most contentious issue of the Border canary in days gone by. The previous “Thomas Model” stipulated that the size was not to exceed 5½ inches. The problems that this caused far outweighed the miserly 5 points that were previously allocated. The current Standard of Excellence acknowledges that the Border is a bird of Type and Quality. If the bird exhibits all the attributes of Type mentioned above and has that “quality”, then it is a true Border. However, oversized birds often lack feather quality and are not seen as being in proper balance as the size of the show cage becomes a limiting factor. How the bird looks and performs in the show cage will be the determining factors when the bird is being judged on size. However, a smaller Border (well under the 152mm in length) looks too diminutive and should never win in good company.

The other issue that is important to note is that cocks and hens are generally of different sizes; the cocks larger than the hens. One does not expect a Yellow Hen to be of the same size as a Buff Cock.
Birds around the ideal length that carry all the essential attributes covered in the Standard of Excellence and are jaunty and proud in the show cage, standing at an angle of 60 degrees, should always win.
The ideal Border canary should have width of shoulders around the 42mm mark. Too often a bird looks good in profile, but when the cage is turned and the judge looks at the bird head on, there is insufficient width at the shoulders. Alternatively, the bird looks more like a sausage shape and does not taper well from the shoulders, through the legs to the tail. This is a bad fault. As the bird is round, the depth of the bird at the shoulders should also be around the 42mm mark.